Don't have C7 Competition Seats Yet? Click the banner to get yours today!

Extract the plastic covers that hide the anterior (front) floor nuts from being exposed. Gently push these items to the anterior (front) section of the car. Extract the front nuts. Proceed to reposition the seat all the way forward so that you can that you can begin working on the rear nuts. Extract the rear nuts. Reposition the seat so that it is all the way back. You want to give yourself enough room for the next steps in the process

Unplug the plug found on the front of the seat. You need to pry out the one wiring plug retainer off the seat frame by using a trim tool.

Pry off plastic cover that the seat belt goes into and you will find one single Torx screw. Remove this screw and then slide the seat belt down to unhook it.


Lift up on the recline lever and stick a small screwdriver in the slot and pry on it carefully. It will slide off.

Take off and keep the small cover for the safety belt guide which will expose two Torx screws. You will extract these two screws at this point. Pry up from the backside of the item to discharge the seat belt guide.

Next, make an effort to extract the side cover that includes the switches by using the GM recommended procedures.

Chances are that you will discover a zip tie. The gap that the zip occupies may be drilled instead of molded into the construction of the plastic.Cut the zip tie and move the cover away by pulling it up at the rear of the cover. Push the area above the switches toward the seat to unhook the clip and slide the whole cover up. Unplug the 2 electrical plugs at the front. Next, pry the plastic airbag cover off. Begin at the top and work your way down to the backside.

Lay a towel or blanket on the floor and turn the seat so that the item is laying on its side.  You may unearth more zip ties at this point. Remove these zip ties. Unfasten the white plastic hooks.

Elevate the cloth flap on the backside so that you can see what you are doing for the next part. Disconnect the seat warmer and the cooling fan.

They are two diminutive gray plugs. You will come across one of them on both sides.

The first thing you need to do is remove these 2 clips (see the picture below).

Pull the plastic rails off of the seat frame.

Stick a small instrument into the lower section as shown below this text.

You could discover that there are three of them (clips) located here, on the other hand, they may only be on the airbag side of the vehicle.

EDIT: The original author of the guide said that every one of the clips remained in the groove when he pulled the seat cover.  You may have to dig the clips out the channel to continue with the project.

Go to work removing the welting that surrounds the seat cover until it is fully released. The entire upper cover and foam will come off right away if done properly. You are now ready to deal with the plastic seat back.

Remove the 2 Torx screws on each side.

There are 2 snap clips at the top and there are also two snap clips beneath the lumbar support bag. The easiest way to deal with these clips is to squeeze them with needle nose pliers to get them to release.

A single solitary Torx head screw nearby the airbag stands between you and your next action.  Remove the screw and then you can carefully rotate the back cover over the airbag. Be very cautious of damaging the fragile air bag cloth sleeve.

Arrange the brand new foam side by side with the aged foam so you can transfer the cooling fans.  They just unsnap from a metal rod that is molded in the foam. A small screwdriver may help in releasing the clips. The new foam has the rod molded in it. It is a different shape rod but the fan still clips in it fine. The white bag is stuck to the foam with some weird mesh type double stick tape. The bag will come off the tape if you pull it slowly. Take your time with it and try not tear or harm it. As soon as the foam is reinstalled, the bag really has nowhere to go. EDIT: The author used 3M 90 aerosol adhesive when he changed the left side. He thought it was more effective than the adhesive tape. A light layer of the adhesive spray will not constrain the air flow created by the cooling fans.

Your work with the old foam and seat cover is now complete. The next steps will deal with the heater.

The foams have distinctive markings that include P.S. for the passengers side and D.S for the drivers side. The heater element is the identical part number for both sides. The original author says is that the one item on his to-do list he did not accomplish til he was finished with this section was cut all the little foam tabs off of the creases. They are not considered necessary. They are in the way of the warmer and the seat cover when you put them in afterward. Don't get rid of the solid orange plastic clips, just the malleable foam. Do not remove the adhesive-like material located on the back off of the warmer yet. Center the warmer above the top oval hole. Utilize a plastic tool to carefully push the heater down in the top crease. Be careful to  avoid the orange plastic clips that are molded in the foam. The clips are for the seat cover to fasten into in the course of assembly. Drag the uppermost segment of the double stick backing off of the topmost part of the foam and fasten it down. Make certain only to perform the preceding action after the warmer is down into the top crease. You should be absolutely certain the heater will not get compressed inbetween the clips.

The identical modus operandi is intended for all the other creases. 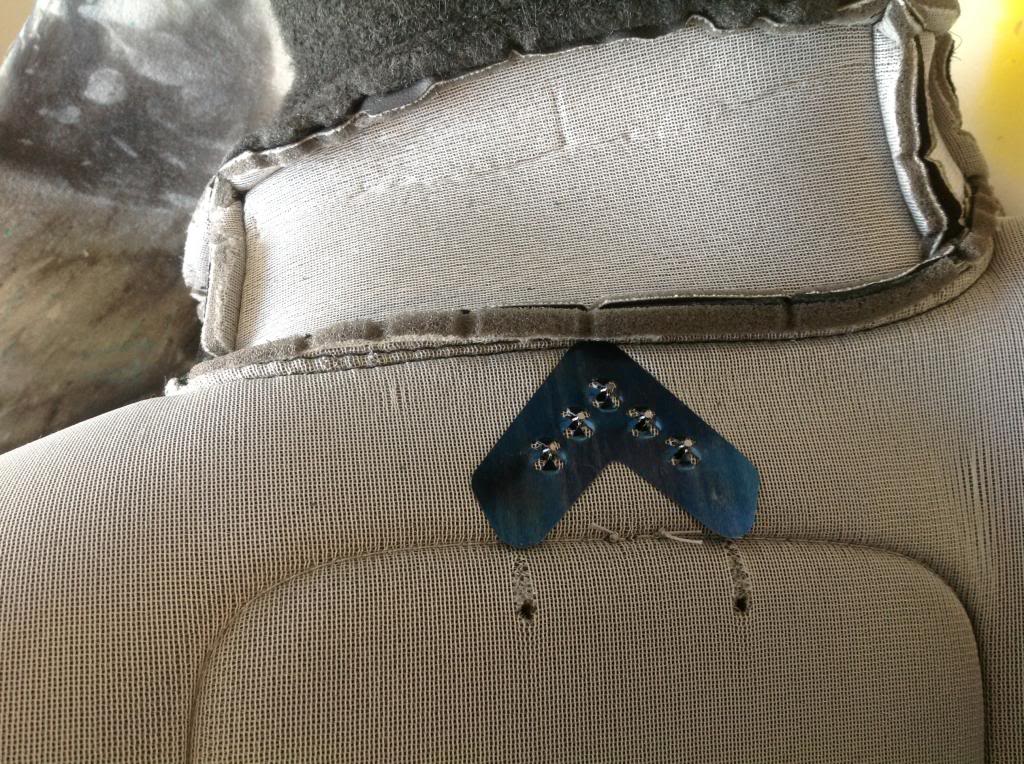 The image above exhibits the fact that the air bag mounting brackets are dissimilar. The competition seat air bag bracket points the air-bag further towards the door to make room for the longer and wider side seat bolsters.

The airbags are of distinctive part numbers, they give the impression of being incredibly analogous and the possess roughly the identical numbers. The left one is the GT seat and the right one is the competition seat air bag.

Unfasten the 2 large Torx screws and then take out the airbag and bracket as one unit. Extract the 2 nuts that secure air bag to the bracket since you need these two nuts for the newer one. Do not attach the new airbag or bracket at this time, it should not be reattached until the very end.

You will need to extract the lower fabric flap from the previous plastic seat back. They use one-time make use of push on clips, twist them off with some vise grips.  Flatten them back out after doing the previous step. The original author says that he was able to re-use the clips later on in the assembly of the seats. Relocate the flap to the new seat back and fasten the new Competition seat back on the frame and use all 6 Torx screws to fasten the item.


The original author said this next section was the trickiest. It is time, at last, to finally install the foam and seat cover on the seat. Install the three metal clips on the rubber welting that is on the border of the seat cover and envelop the entire perimeter of the painted seat with some sort of tape. (See the red line in the picture for further details). The plastic instruments will scuff the painted seat back, the original author used electrical tape, but he also thought that masking tape ought to work as well if required.

Fold the seat cover over the edging and put in the rubber end first. Get your plastic instruments and push the rubber down in the seat back groove or channel. Make use of your fingers, thumbs, and flat plastic pry equipment. Continue pushing it downwards into the channel or groove and ultimately it will settle. Persist in doing this all the way around until you have shaped a smooth border with no wrinkles.

Press the bottom on the seat cover through the bottom. Hook the flat plastic over the frame and install the 2 metal pinch clips. Make certain the cooling fan and the seat warmer wiring appear through on every corner. Plug both plugs in at this point in time.

Turn the seat on its side and re-fasten the flexible straps on the bottom side.The original author says that he decided to re-use the zip ties to get these back on the seat.

You can place the carbon fiber bezel on the seat. They just re-fasten right back into the seat. Nonetheless, you might discover that they are enormously difficult to get them to snap in on every clip because of the new seat foam. These are carbon fiber overlayed pieces, you can spot the clips and the carbon over plastic layers in the image below.

Reinstall the seat belt guide from the GT seat with the 2 Torx screws.

The very last key section is the air bag and covers. Fasten the airbag to the airbag bracket using the 2 nuts that had been detached from the GT seat air bag. Plug the yellow electrical plug into the bottom of the airbag. Do not forget to push the orange part back into it to secure the plug in position. Simply allow it to hang down there on the side of the seat. Take the anterior half of the airbag cover and fasten it on the seat. It merely has a solitary clip that binds it in position.

Now gently turn the air bag inside the cover being tremendously cautious not to harm the external layer of cloth. Put in the 2 Torx bolts that constrain the air bag bracket to the frame.

Slide the rear half of the airbag cover from the backside. Utilize the one anomalous Torx screw that was detached from the old side airbag bracket. The original author installed that in the upper screw hole to fasten the covers together. The competition seats require 4 screws for each side to bind these covers as one, the original author utilized black Phillips screws in the remaining holes during production but he has ordered the right screws from the dealer.

Install the side plastic switch panel and plug in the 2 electrical plugs. If you have followed the instructions then you should have a lone machine Torx headed screw left for this panel. The original author says that he placed the zip tie back where it was because he said, "I want it to look factory".

You have completed work on the seat.

Drop the seat back in the vehicle and plug the main harness back in beneath the front of the seat. You are now able to hook the battery back up. You are also albe to put all the nuts and seat track covers back on at this time. It would be an excellent time to unscrew the other seat if you did not take them both out simeotanously.